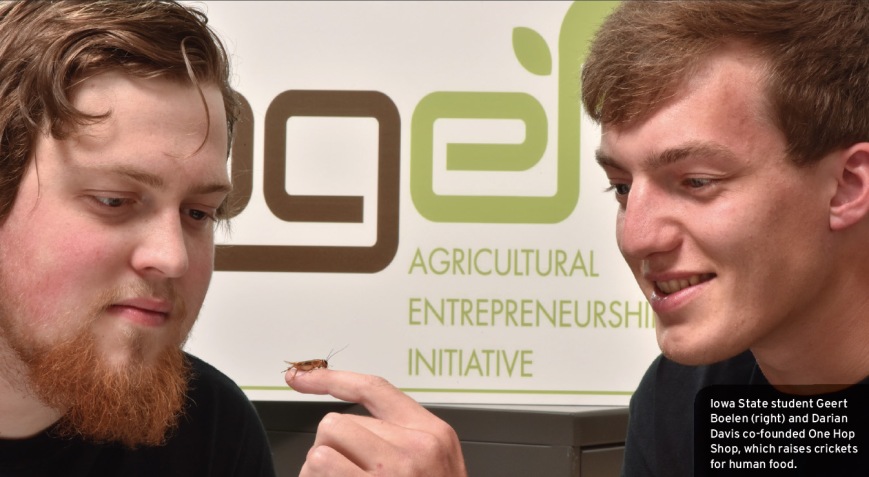 For a young man who grew up dairy farming, Geert Boelen has found a novel way to diversify his future farm business.

Boelen may have come a long way from his childhood home, but farming has been a  constant. Eight years ago, he and his family relocated from a dairy farm in the Netherlands to one in Brooklyn, Iowa. With his agricultural focus, he decided Iowa State was the perfect place to pursue a higher education.

Besides his major in agricultural business, Boelen is taking advantage of the university’s  unique minor in entrepreneurship – and participating in Iowa State’s Agriculture  Entrepreneurship Initiative, created in 2005 to inspire students to think outside the box as they envision careers in agriculture. At the initiative’s core is the student incubator
program, which provides resources and mentoring for around 15 students each semester as they develop business plans and concept pitches.

As a participant, Boelen alighted on the tasty idea of cricket-farming after hearing a  podcast titled “Are edible insects the future of food?” He is now in the research and  development stage of a business cleverly called “One Hop Shop,” which raises crickets for human consumption. He and his co-founder, Darian Davis, have a business goal to provide restaurants in Ames and beyond with specialty-flavored whole crickets, and ultimately to become the most efficient and sustainable cricket farming operation in the  United States.

Boelen’s idea is one of many incubating in the multi-pronged Agriculture Entrepreneurship Initiative, in which students network with entrepreneurs; pursue coursework, workshops and internships related to entrepreneurship; and work toward graduating with viable business plans. The program is focused as much on generating new ideas as on teaching entrepreneurial thinking, whether graduates seek to initiate startups or simply bring a fresh perspective to existing businesses. Boelen said, “I have been very fortunate to participate in the Student Incubator program. Being in the same room with like-minded people and getting immediate feedback on new ideas helps me tremendously.”

The potential for the Agriculture Entrepreneurship Initiative to diversify and grow Iowa’s economy is not lost on organizations such as the Iowa Farm Bureau, which is the largest source of private support for the program. Since many of the students are  preparing to return to family farms and agribusinesses, the initiative can help re energize rural Iowa – and the state’s economy – by infusing farming operations and agribusinesses with entrepreneurial energy, knowledge, and leadership.

Such programs are preparing a whole new generation of professionals ready to hit the ground running – or at least hopping, in the case of Boelen. “The mentors I have through this program have helped me immensely during the semester,” he said. “They’ve  supported me and questioned me to better myself as an entrepreneur and as a person.”

This article was originally published in VISIONS magazine. To receive the full issue delivered to your mailbox four times per year, become a member of the ISU Alumni Association.