Here are five things to put on your Cardinal & Gold radar this week:

1) The Iowa State track and field season ended over the weekend at the NCAA outdoor championships, and the Cyclones saved their best performance for last as sophomore Jhoanmy Luque finished fourth in the triple jump with a career-high 43-10 1/2. Across Luque’s six jumps at Hayward Field on Saturday, all five of her legal jumps were better than the personal best she had set just two weeks earlier. Luque’s performance earned Iowa State five team points. Combined with Christina Hillman’s three points for finishing sixth in the shot put on Thursday, ISU finished tied for 29th overall as a women’s team with eight points.

2) Speaking of outstanding performances in women’s athletics, how about senior

softballer Aly Cappaert (’15 journalism & mass comm), who on Thursday became the first Iowa State softball player selected as the sport’s Big 12 Scholar-Athlete of the Year. The Ankeny native, who earned her undergrad degree in just three years, maintained a 4.0 GPA this season as a graduate student in higher education. She is also ISU’s all-time leader in walks (93) and hitting streak (18 games), and ranks second all-time in career home runs (38), RBIs (138), and slugging percentage (.609).

Iowa State has now had 15 student-athletes named Big 12 Scholar Athlete of the Year since the award’s inception in 2012, more than any other school in the conference.

3) The Iowa State Cyclone Football ‘Varsity’ Marching Band is back home this week after completing a historic trip to Normandy, France last week in commemoration of D-Day. For tons of photos, stories, and videos from their journey, check out the band’s Facebook page. 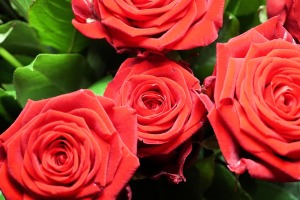 4) This weekend Reiman Gardens will be playing host to its annual Rose Fest, which coincides with the Iowa Rose Society’s annual show. Stop and smell the roses; no preregistration is required.

Cost is free for members and Iowa State University students with ID. The general public pays $8 for adults, $7 for seniors ages 65+, $4 for kids ages 4-17, and free for kids ages 3 and under.

5) Alumni and friends in Denver are gearing up for “Celebrate State: Denver,” which will be held June 23 at ISU alumni-owned Dry Dock Brewing Co. The deadline to register is coming up June 16, so if you’re in Denver or will be there June 23, sign up now!