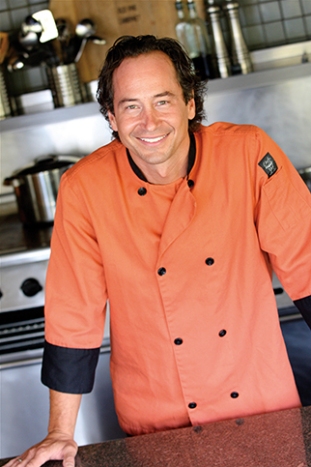 Jeffrey Saad was 13 years old when he decided he wanted to wash dishes in a local Chicago diner so that he could learn about the restaurant business.

“I remember they had a wedge of iceberg lettuce and drizzled salad dressing on it,” he says. “And I thought, ‘Whoa, these guys can cook.’”

Years later, Saad’s tastes are a little more sophisticated. He has created multiple successful restaurants in California’s Bay Area and is currently owner of The Grove restaurant group. He is the author of the cookbook Jeffrey Saad’s Global Kitchen: Recipes Without Borders. He has developed and sells a collection of spice blends. He hosts the Cooking Channel’s The United Tastes of America. He does restaurant consulting, live demonstrations, and television appearances. A typical week sends him across the country and often even around the globe tasting, cooking, and talking about food.

It’s all part of indulging what self-proclaimed “food nut” Saad (’89 hotel & restaurant management) calls his “culinary ADD” – a constant need to learn, explore, and taste. It’s a powerful force that led him to chuck a successful career in real estate and pursue his passions.

It wasn’t long before Saad found a new direction to take his passion and expertise. While preparing dinner for friends in his Encino, Calif., home, Saad eloquently explained the latest cooking techniques. The reaction? Oh my God. You’ve got to get on Food Network.

Saad surfed the Web and found a casting call for season five of The Next Food Network Star, the Network’s popular reality series that launched the television careers of Guy Fieri, Aaron McCargo, Jr., and others. Saad was not only cast, he finished as runner up to Melissa d’Arabian (now of Ten Dollar Dinners) and was given first his own Web series and then a show on Food Network’s sister network, The Cooking Channel. The United Tastes of America has sent Saad around the country to explore the many nuances of traditional American fare: hot dogs, hamburgers, donuts, and the like. He has also appeared as a guest on Rachael Ray’s and Bobby Flay’s shows, and was the runner-up to celebrity chef Marcus Samuelsson on the second series of Food Network’s Chopped: All-Stars, besting Iron Chef Michael Symon in the process.

Saad said the television experience has been wonderful, but it’s also incredibly difficult.

“You know, it’s one thing to have a good smile and a good personality and love to talk about food,” Saad says. “It’s another thing to be a great chef. But it’s an entirely other thing to do it all at once on camera and make it all happen.”

As for Chopped – a culinary game show in which chef contestants have 30 minutes to create dishes out of “mystery baskets” of hodgepodge ingredients, Saad says it’s as hard as it looks. Maybe harder.

“I always say nothing good happens in life until you’re super uncomfortable, and I was super uncomfortable,” Saad says. “You push yourself to a whole new level; it’s the real deal. You open your basket, you look at your chicken feet, and you start cooking. There was no chance to think about what you’re going to do. You literally have to be creating the dish in your mind as you’re chopping.”

Saad says he loves being a TV chef because of the opportunity it provides to reach a virtually unlimited audience, as opposed to maybe just 60 seats in a restaurant on a given evening. And while his current TV show explores flavors around the U.S., Saad’s true passion – and the subject of his 2012 cookbook – is traveling the world in search of flavor.

“Just like a song will take you back to a great memory, a flavor can take you back to a place,” he says. “People will say, ‘I really like that thing I always taste in Chinese food.’ They don’t know it’s Szechuan peppercorn mixed with cloves, cinnamon, star anise, and fennel seed. Why would they? That’s a lot to know. But for me, that’s what I live for. I’m a real traveler and inspired by people and cultures and food, which is the foundation of every culture. I’m determined to go to every country in the world and cook in every country of the world.”

Saad says his favorite country so far has been Thailand, and the one he is most looking forward to visiting is Morocco.

“I can’t wait to go to Morocco,” he says. “I just want to walk into the spice markets where the spices are piled up like snowdrifts in Iowa. I can smell  that market, even though I’ve never been there.”

Saad says, really, he’s “visited” a lot of countries purely by experimenting with their spices and flavor profiles. He calls it “mind-tasting.” He’s also picked up a lot of cuisines through family and experiences at home. For example, the techniques he learned from his Iranian mother-in-law inspired the Middle Eastern chapter of his book.

The book is something Saad has dreamed of doing his entire life.

“The Italian chapter takes me back to my Italian restaurant; the Mexican chapter takes me back to my Mexican restaurant,” Saad says. “Everything in the book has special meaning to me, so much that if I never sold a copy I’d still be happy because I would have it in my arms as a kind of journal of my life. I love it; it has captured everything I’ve done.”

Saad says his career is hectic and it’s sometimes hard to travel without his family (he and his wife, Nadia, have two children – Isabella and Sebastian), but he couldn’t be happier with the decision to pursue his passion.

“It’s what I’m really meant to do,” he declares. “In life you need to do what you believe in your heart and soul you’re meant to do and what you love to do. And if you do that, you’ll truly succeed. When work and pleasure become the same thing, you know you’ve arrived. There is no line. It’s not like I’m going to work and I’m going home; it’s like I’m living life. I am inspired. I wake up and do what I do and there is no on/off switch. 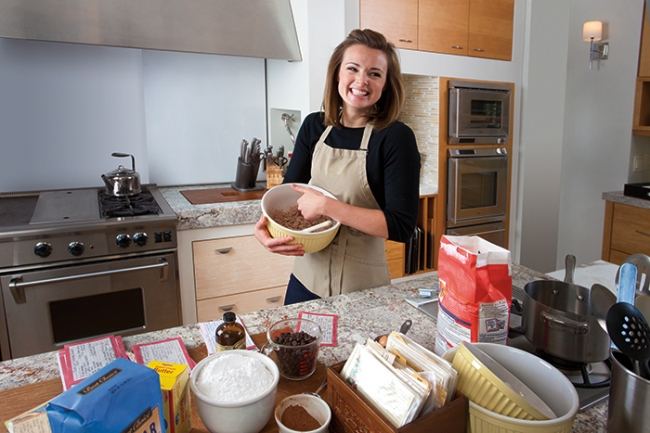 Balloons and confetti drop from the ceiling on the set of The Rachael Ray Show, and 22-year-old Iowa State senior Madison Mayberry’s mouth drops open in joy and disbelief.

She’s just won a trip to Paris and a $60,000 kitchen makeover for turning Thanksgiving leftovers into potato turkey pancakes with sweet pea gravy. Plus she’s just found an excellent item to put on her resume when she goes in search of food editing internships: “Winner, Rachael Ray Show’s ‘Hey, Can You Cook?’”

Hey, she can cook.

Five years after winning the Rachael Ray contest, Madison Mayberry (’09 journalism) works as a food editor – the job of her dreams, she says – and a lot of her success can be traced back to the day her friend rented video equipment from ISU’s Greenlee School and sent a video of her making veggie blueberry pasta in the Alpha Gamma Delta kitchen to food media queen Ray. Since being selected for the original “Hey, Can You Cook?” competition, Mayberry landed an internship at Better Homes & Gardens magazine, launched the blog “Espresso and Cream,” worked in two food editor gigs for Meredith Corporation, appeared on Ray’s “Hey, Can You Cook? All-Stars,” and, in January 2013, started working in Minneapolis as a food editor for General Mills.

It’s all a dream come true for the little girl from Orange City, Iowa, who used to throw random ingredients into a blender, feed them to the dog, and pretend she was doing it all for the readers of a glossy magazine or cookbook.

“My mom was a saint, because she never discouraged me,” Mayberry says. “I’m sure plenty of times it wasn’t very good. I just decided early on to throw out the recipe book and give it a go.” 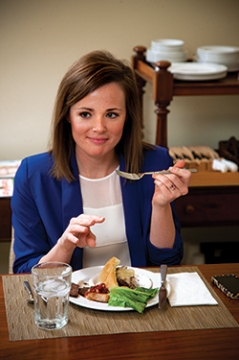 Today, Mayberry is a walking encyclopedia of recipes, cook times, and measurements. Her jobs have required her to write recipes, have them taste-tested by food professionals, and organize them into articles for publication. And when her recipes aren’t going into a magazine, they’re going on her blog.

“I’ve been [blogging] for about three years,” Mayberry says. “I just wanted a creative outlet, because I realized that when you work in magazines you end up creating a lot of content that someone else tells you to create. So I decided I wanted something that was just for me – where I could have all my recipes in one place.”

The result is Espresso and Cream, which Mayberry says has just about as many social benefits as creative.

“I feel like it’s helped me meet other people in food who have similar passions,” she says. “It’s not often that you find twentysomethings who really like to cook and really like to be in the kitchen, so I’ve met a lot of other girls who are a lot like me.”

Mayberry says she’s dragged her husband on several “blogger dates,” in which she’s had the opportunity to meet in person the friends she’s made through blogging; creating her blog and reading others’ blogs is something to which Mayberry says she devotes several hours per week.

“You can’t discount bloggers,” she says. “You have a group out there that’s going to buy products they recommend and read books they publish. You have to take notice of that, and I think the publishing industry has. But there’s a time and place for tried-and-true, tested recipes, and that’s where publishing comes in.”

Mayberry says her employers have always been supportive of her blog, and she says being part of the blogosphere has made her a better editor. She says she recently evaluated the amount of time she devotes to her blog and where it may go next. (“For anybody who invests a lot of time into a blog, it would be crazy for them not to say they’d like to become one of those blogger success stories,” she says.)

Back in the kitchen, Mayberry says she has special affinities for vegetables, peanut butter, and baking – but she does it all. A vegetarian married to a meat eater who has developed recipes for everything from Southern breakfasts to fancy appetizers, she has always had to be versatile in her cuisine.

“I’m a really simple cook,” she says. “I usually eat more vegetables than seems humanly possible. Although I enjoy creating the decadent desserts and cheese-filled recipes, we try to eat really healthy at home.”

Mayberry says she thinks the Internet has made quality food more accessible to the masses and encouraged more people to get into the kitchen.